What is Mildew, Really? The Difference Between Mold and Mildew 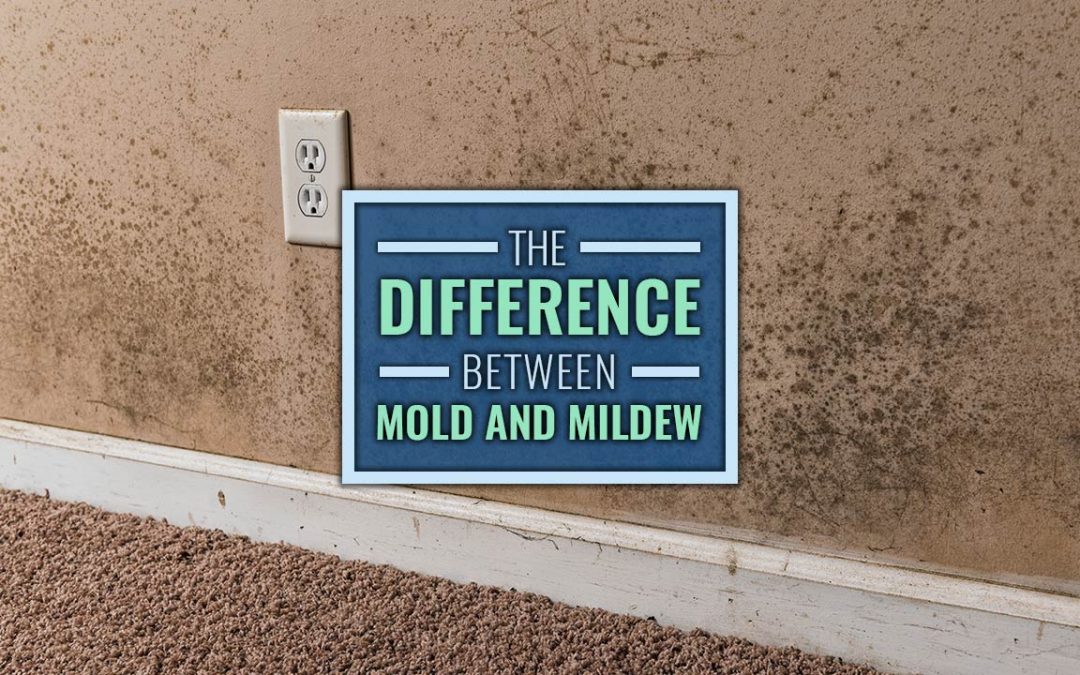 There’s a lot of confusion and misinformation out there about the difference between mold and mildew. Both are common types of household fungi and both thrive in damp, humid environments. Because they share a number of key characteristics, it’s not uncommon for people to mistake one for the other or assume they’re equivalent.

In reality, mold and mildew are not the same things (although mildew is a subclass of mold). Understanding the differences between the two is the first step in accurately identifying and effectively eradicating either (or both) from your home.

Mold is a type of fungus that floats through the air in the form of microscopic spores. There are more than 100,000 known species of mold, many of which are harmless to humans. However, certain species are prone to growing indoors. If left to grow, mold can cause damage to your home and make you sick.

Mold can grow on just about any organic surface where moisture and oxygen are present, including wood, carpets, paper, furniture, plants, and insulation. Because it grows best in damp environments, mold is commonly found in bathrooms, basements, kitchens, and crawl spaces. It also often grows near leaks in roofs and windows or behind appliances where water has collected.

While Mildew grows on top of flat surfaces, mold penetrates the surface and grows into a porous material, eventually breaking it down and causing lasting damage. Mold growth reveals itself in the form of irregular patches of green, black, brown, orange, pink, purple, or other colors. It often appears fuzzy and is typically accompanied by a musty smell.

Mold can cause minor to severe health issues, depending on the species, length of exposure, and whether or not the individual has any pre-existing conditions, such as allergies or asthma. If you’re experiencing cold- or flu-like symptoms and you think mold may be the culprit, it’s important to get in touch with your doctor and contact a qualified mold remediation contractor.

Related: How to Get Rid of Mold in Your Home

Mildew is a specific type of mold; FEMA describes it as early-stage mold. Like other kinds of mold, mildew is a microscopic fungus that travels through the air in the form of tiny spores. When these spores land in damp or humid environments, mildew begins to colonize and grow.

Unlike mold, mildew doesn’t penetrate surfaces and grow into the materials it lands on (though it can still cause cosmetic damage). Instead, it grows on top of flat surfaces and often collects in places like the grout between your bathroom tiles.

While mildew is unsightly and should be removed as soon as you notice it, it’s generally much easier to spot and get rid of than mold. Because mildew sits on top of the surfaces it grows on, all you generally need to remove it is a good household cleaner and a scrub brush.

One of the reasons mold and mildew can be so hard to tell apart is their similar smell. Both fungi produce a musty, earthy smell. If you notice this type of smell in your home, it’s likely that you have one or the other.

Since mildew grows on surfaces, it’s often easier to spot in its early stages than mold. Mildew is generally classified as either powdery or downy. Powdery mildew is white or gray in color. Over time, it turns yellow and eventually dark brown or black. As the name suggests, it has a fine, powdery texture. Downy mildew initially shows up in the form of yellow splotches. As it ages, these splotches turn a darkish brown.

While Mildew is not as dangerous to your health as certain types of toxic mold (black mold, for example), nor is it as damaging to your home, mildew should still be taken seriously and it’s important to remove it as quickly as possible in order to prevent adverse health effects and/or cosmetic damage to your home.

Can mildew make you sick?

Like mold, mildew can cause health problems with prolonged exposure. While the fungi themselves are not toxic, certain species produce mycotoxins, which can cause mild to severe symptoms in humans. These symptoms are typically reminiscent of a cold or flu and are more dangerous if you suffer from a pre-existing condition like allergies or asthma.

The main reason mold poses a greater threat to human health is because it’s more likely to go undetected for extended periods of time. Because mildew is a surface fungus, it’s usually easier to spot and remove.

Related: 7 Ways to Deal with Mold Quickly to Avoid Allergies

Concerned about mold and mildew in or around your home? Contact a professional!

Minor mold and mildew issues can often be handled by the homeowner without the need for professional testing or remediation. However, if you think you may have large amounts of mold or mildew growing in your home or are suffering from an unexplained cold or flu-like symptoms, expert testing and analysis are likely in order.

The state-of-the-art laboratory and team of expert consultants at JSE Labs are here to help. We offer accredited testing services and inspections and can help you determine the best course of action to keep you and your family safe.